SpaceWeather.com Meteor Counts
back to spaceweather.com

Radio meteors are pings heard in the loudspeaker of an amateur radio when a distant radio station or radar signal bounces off the ionized trail of a meteoroid disintegrating in Earth's atmosphere. Radio meteor listening stations usually detect 2 or 3 times more meteors than visual observers. As a rule of thumb, divide radio meteor counts by two for an estimate of corresponding visual meteor rate. Radio meteor rates listed under Space Weather Current Conditions are the maximum number of meteors per hour detected by an array of 88 - 110 MHz observing stations located in New Mexico, western Canada, and central California.

Radio meteors are unfamiliar to many skywatchers, so we've included a radio meteor tutorial below with more information about this technique.

Both radio and visual meteor rates are usually highest near dawn and lowest near dusk. That's because the dawn sky is moving directly into the swarm of space dust surrounding our planet. Just as bugs splatter on the front windshield of a moving car, but not on the rear windshield, lots of meteoroids hit the dawn sky, but very few can catch up with the sky at dusk. The maximum meteor rate listed on SpaceWeather.com usually corresponds to the rate at local dawn. Exceptions will be noted.

Above: The rate of meteor activity is usually greatest near dawn because the earth's orbital motion is in the direction of the dawn terminator. Earth scoops up meteoroids on the dawn side of the planet and outruns them on the dusk side.

Radio Meteor Tutorial
back to spaceweather.com

Meteor showers are caused by tiny bits of comet debris that strike Earth's atmosphere at velocities exceeding 50,000 to 100,000 mph. When fast-moving meteoroids plummet through our atmosphere they heat and ionize the air in their path. The luminous ionized trails are not only visually striking (if seen at night) but they also reflect radio waves. During a major meteor shower, radio signals from TV stations, RADAR facilities, and AM/FM transmitters are constantly bouncing off short lived meteor trails. For those who know how to listen, it's easy to hear the echoes. 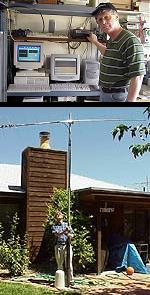 Daily radio meteor counts reported on spaceweather.com come from an array of FM listening stations including this one operated by Stan Nelson in New Mexico (pictured left).

One of the advantages of radio observing is that radio meteors can be detected when skies are cloudy, or even during daylight. In fact, the International Meteor Organization lists a dozen "daylight meteor showers" that peak after sunrise and are monitored almost exclusively by radio observations. The most intense of these is the Arietids which peak each year around June 8. They usually produce 60 to 100 radio detections per hour.

Radio observing has some advantages at night, too. The human eye can only see shooting stars brighter than 6th magnitude, but radio methods can detect meteors that are at least 5 times dimmer. That's the main reason radio observers detect more meteors than their visual counterparts.

Above: Radio meteor observer Stan Nelson in New Mexico recorded 18 meteor echoes per hour near sunrise on August 7, 2000, using an FM system tuned to 88.7 MHz. Meteor rates were greatest near dawn when the sky above Nelson's observing site was headed directly into the Perseid meteoroid stream.

A disadvantage of radio observations for serious meteor watchers is that a ping heard in the loudspeaker doesn't tell the listener where the meteor came from. Was it a Perseid, emanating from a radiant in the constellation Perseus, or a sporadic, a member of the random background of shooting stars that may come from any direction in the sky? Visual observers can discriminate easily, but radio observers cannot. Nevertheless, when skies are cloudy radio observing can't be beat.

Above: Stan Nelson recorded this audio signal on April 11, 1999 while listening for meteor reflections from the powerful NAVSPASUR radar at 217 MHz. The pale yellow trace on top is the envelope of his ham receiver's loudspeaker output. The blue-colored time vs. frequency plot is the signal's dynamic spectrum. Click on the image to play the WAV-format audio recording. The dynamic spectrum of the radio meteor echo looks like an "L." The slanted, nearly vertical piece is the reflection from ionized air around the rapidly-moving meteoroid (sometimes called the "head" of the meteor). The doppler-shifted frequency of the reflection changes rapidly because the meteoroid moves across the line-of-sight of the transmitter at high speed. After the meteoroid disintegrates, all that remains is a slowly moving trail of ionized air. The velocity of the residual trail is low, typically no more than 0.02 km/s, compared to 30 - 70 km/s for the meteoroid. The reflection from the slowly moving gas does not experience a significant doppler shift, so it appears as a horizontal line (the bottom of the "L") in the dynamic spectrum.

The Ghost of Fireballs Past

Tuning in to April Meteor Showers